The case for taking disaster seriously

Recently, Amy Feldman of All Good Work challenged me for this vague and unsupported statement. That sent me on an industrious search for clear reliable evidence, and through a rabbit warren of government reports, scientific discussions, and disaster data sets.

What I found was that some disasters are indeed becoming more frequent and strike with greater force, more people are at risk for being in harm’s way of all types of hazards, and more of the people in harm’s way are more vulnerable to damaging effects. These increases are driven by environmental changes, population expansion, and greater technological dependencies.

Before we look at the numbers, let’s be a little more specific about what the indicators say.

Some disasters are becoming more frequent and strike with greater force

More people are at risk for being in harm’s way

A few points of interest

So, what support did I find for these claims?

Alas, I didn’t find simple hard proof. Disaster is not only a very complex concept, but, by its very nature, chaotic and incoherent. It’s easy to specify measures such as “number of incidents,” “number of people affected,” and “economic costs,” but defining metrics for measurement is far more challenging, and collecting reliable data comprehensively is yet more challenging.

So, while it’s easy to find a smoking gun, there are always questions about why it went off.

That said, let’s take a look at some numbers.

According to the Centre for Research on the Epidemiology of Disasters (CRED), “3.9 billion people, or about half the worldwide population, were potentially exposed to natural disasters in 2018. When counting if a region was affected by multiple disasters, this number jumps to 10.7 billion people.” [CRED 2019].

The same source recorded reports of 315 natural disaster events, affecting over 68 million people, and incurring US$131.7 billion in economic losses. Flooding accounted for 50% of the total affected, followed by storms which accounted for 28%. Earthquakes were the deadliest, accounting for 45% of deaths, followed by flooding at 24%.

These numbers are of country-level events.

Looking at the data collected by the Centre for Research on the Epidemiology of Disasters (CRED) for country-level events, it is clear that 2018 was not an anomaly, either globally or for the US. Visual inspection reveals that disasters started increasing in frequency and impact around 1960 and that the rate of increase may have  started to slow around 2000. It also shows that the increased numbers of events lies predominately from hazards that are amplified by environmental factors such as climate changes and land use. All types of events show increased impact and costs [EM-DAT].

While these trends could be explained by changes in reporting, data collection, or other factors not related to actual events, expert analysis indicates that numbers and impacts of disasters truly are rising:

“People and assets around the world are being exposed to a growing mixture of hazards and risks, in places and to an extent previously unrecorded.” [GAR19]

“Simply put, the concentration of individuals and produced capital in hazard-exposed areas today is greater by an order of magnitude than it was 40 years ago.” [GAR13]

From the US Congressional Research Service:

“Given the variables described in this report that can lead to an increase in the number of declarations, including trends in severe weather patterns, population growth, and development, the upward trend of declarations will likely continue if declarations policies remain unchanged.” [LAO 2019]

Finally, the data also reveal much greater variability in number of disasters from year to year, suggesting greater unpredictability and uncertainty, and a growing need for flexibility in response capacity.

“What is evident, is that change is happening more quickly and surprisingly across multiple dimensions and scales than we ever thought possible. This means that although modelling and metrics are important, we can no longer use the past as a reliable indicator of the future.” [GAR19]

The past 20 years offer some striking numbers

The five years with most billion-dollar events in the US 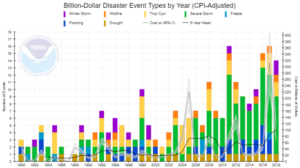 The five costliest US hurricanes on record 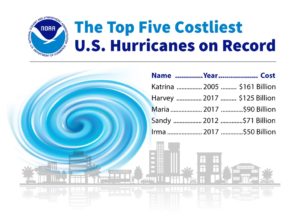 The majority of the largest and most destructive wildfires in California