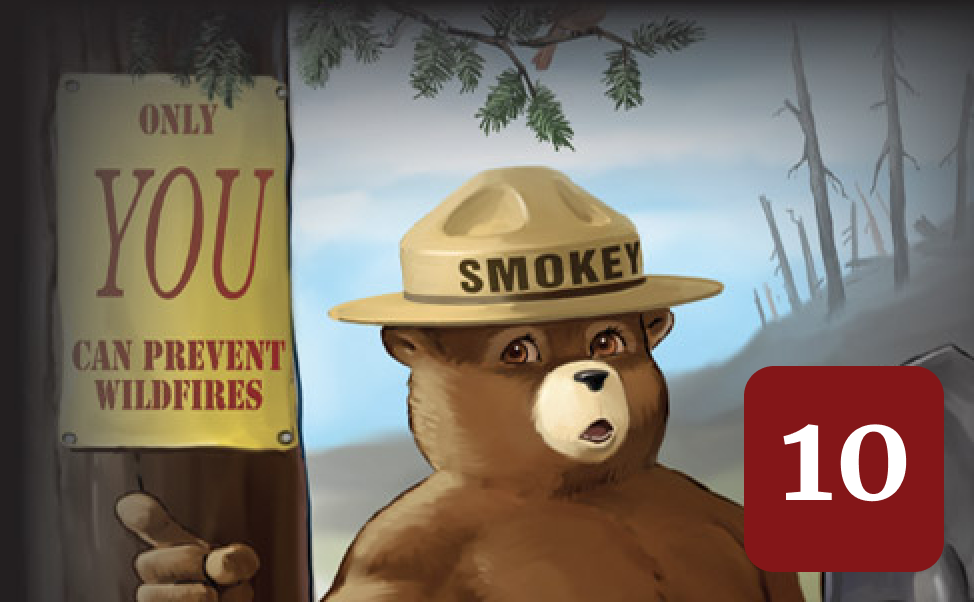 Have you ever heard the catchphrase, “Remember… Only YOU Can Prevent Forest Fires”? If so, then you’re familiar with one of the longest running public service campaigns in the United States, promoting wildfire safety.

Did you know that wasn’t Smokey’s original catchphrase though? It’s also not our favorite bear’s most recent message!

20 years ago, in response to a significant outbreak of wildfires in areas other than forests, Smokey’s catchphrase was changed to: “Only You Can Prevent Wildfires,” reminding all that wildfires occur not just in forests, but everywhere.

77 years ago, Smokey had this warning for us,

Not as catchy, but quite alarming. Were humans really to blame for 90% of forest fires? Is that still true today?

Let’s see how our contenders face off!

Humans vs Nature!
ROUND 1

Since 2001, the National Interagency Fire Center has been compiling annual wildland fire statistics for both federal and state agencies. The data speaks for itself: 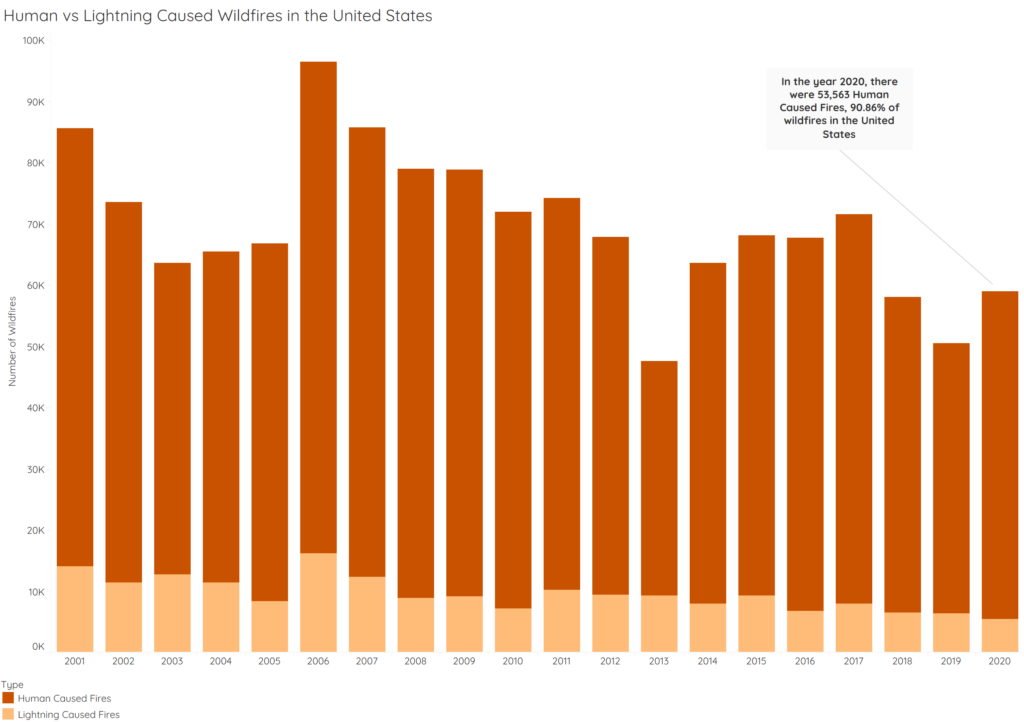 Even as recently as last year, humans were the root cause of over 90% of wildfires in the United States. That trend appears to be increasing (up 7% over 20 years). So,

Humans vs Nature!
ROUND 2

In terms of total impact, though, who poses the bigger threat?

By acres burned on a yearly basis, this bout goes to lightning. Fires sparked by lighting burn more area on average than wildfires started by humans. This is due to most human caused fires starting in the Wildland Urban Interface (WBI), a zone of land defined as “area or zone where structures and other human development meet or intermingle with undeveloped wildland or vegetative fuels”.

Wildfires that start here cause a bigger threat, but are more easily reached by firefighters. 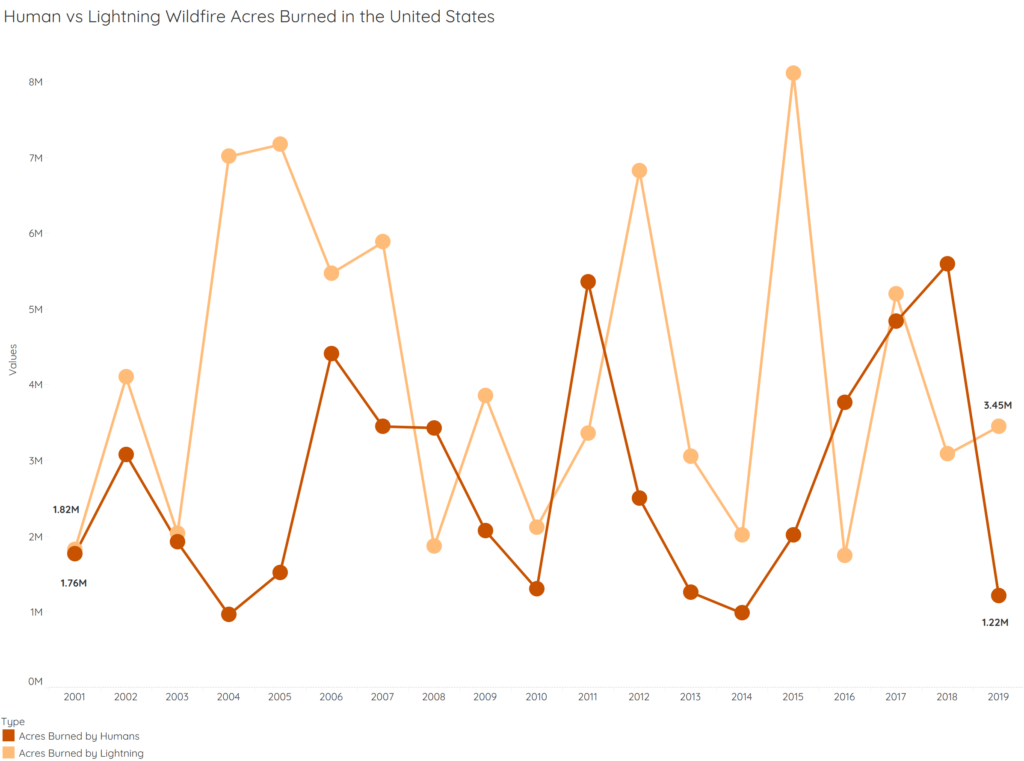 Looking at the cumulative growth of acres burned over time, we can see that fires started by lightning have burned a greater area than fires caused by humans: 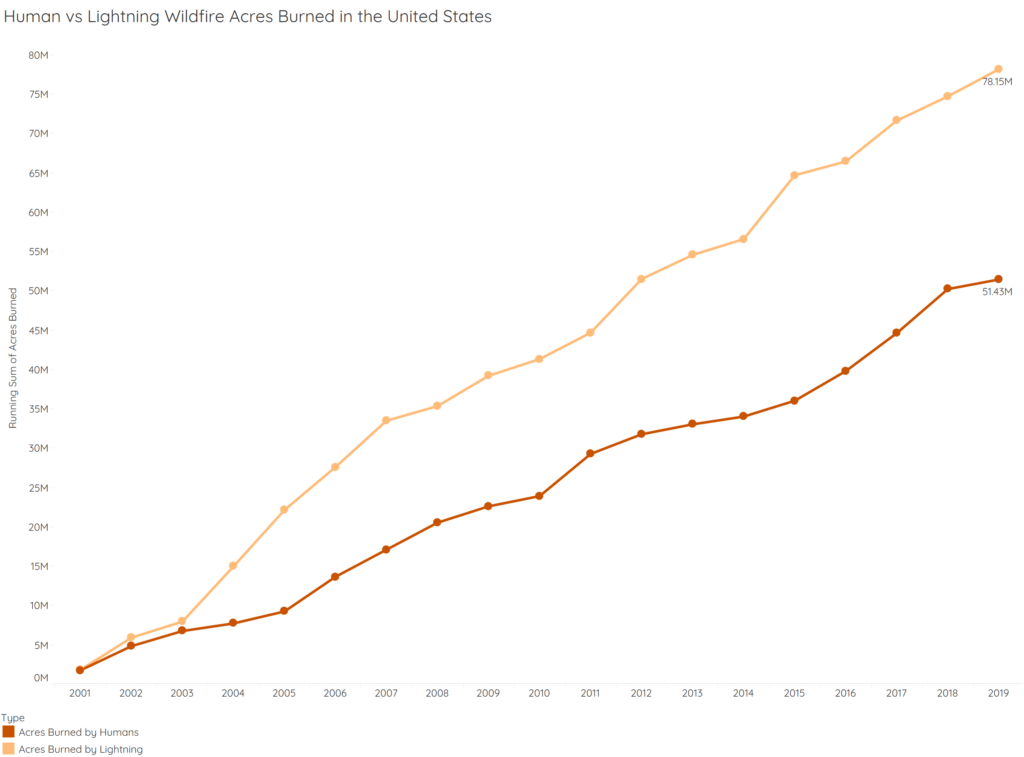 Humans vs Nature!
ROUND 3

So if humans cause roughly 9 out of 10 wildfires, but more acres have burned due to lightning, who is the real winner of the match?

A study published in 2020 analyzed over 1.6 million wildfires between the years 1992 and 2015, and found that “Human-caused wildfires accounted for 97% of the residential homes threatened (within 1 km of a wildfire) and nearly a third of suppression costs.”

In 2020, researchers at the University of California Irvine found that “large human-caused fires have a significantly larger impact on the ecosystems when compared to lightning-caused fires.” They concluded that the faster the fire spread, the more damage was done to the local ecosystem, and fires started by humans generally grow faster.

Personally, I think it’s time to bring back a slightly modified version of Smokey’s original catchphrase,