Prescription Rx for our forests? 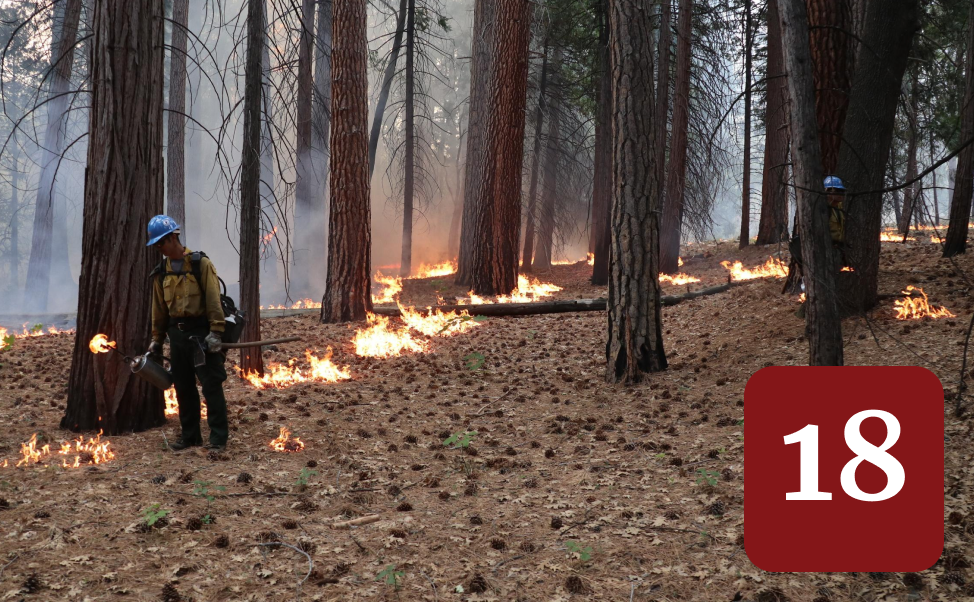 Prescribed burns are nothing new. Native Americans incorporated controlled burns into their culture not just to reduce wildfire fuel, but also as a vital tool in their agriculture and industry.

“Indigenous people have been practicing controlled, deliberate burns in North America, and around the world, for millennia. For the Yurok, Karuk and Hoopa Tribes of Northern California, human-managed fires across their traditional lands are vital. They promote the growth of traditional food sources, like acorns, and basket-weaving materials, like hazel. The fires even support the life cycles of salmon.”

Unfortunately, Europeans came along with an old-world fear of fire and said, “don’t set things on fire!” That led to a practice of forest management that has left our forests with a natural stockpile of wildfire fuel in the form of dead vegetation, and devastated Native American cultures in the process.

But prescribed burns are once again accepted as a valuable wildfire prevention tool. According to Thom Porter, the chief of California’s CalFire wildfire agency, prescribed burns are “our best and most cost-effective tool… to reduce the amount of fuels in the native vegetation areas and also areas that have invasives.” (SF Gate, May 2021)

A serendipitous experiment on forest resilience to wildfire

A recent accident, reported in the LA Times, has produced strong evidence that prescribed burns can not only reduce the fuel available for a fire to start, but can even make a forest more resilient to wildfires.

The Goosenest Adaptive Management Area is a patch of heavily logged timberland in the Klamath National Forest. In the past twenty years, scientists have worked on an experiment  to see how much they could restore the forest to the way it was a century ago. They created four sets of five 100-acre plots, each with a different forest management plan.

Last August, the Antelope fire swept through and burned all twenty plots to the ground, destroying one experiment but creating another:

“Because we have five replicates of each of these treatments that were all hit by fire burning under oftentimes similar conditions, we can tease out the effect of weather and the effect of fuels, It will be a very compelling example of the interaction of fuels treatments and weather in affecting the outcome.”

“‘In areas where we didn’t do anything, the untreated controls, the predominant fire behavior was a crown fire which killed every tree and consumed the entire tree crown,’ said Eric Knapp, research ecologist with the U.S. Forest Service.

“However, the plots that had been thinned and then treated with broadcast burning — in which an area of land is set alight to mimic naturally occurring wildfire — emerged relatively unscathed.”

Preparing the patient for the medicine

Despite the general acceptance of the efficacy of prescribed burns, they are still not used very much.

“The federal government… has completed only half of the fuels treatments it had hoped to get done in the state for the year — a statistic that profoundly dismayed wildfire experts. … As of mid-September, the Forest Service had completed or contracted out fewer than 37,000 acres of prescribed fire projects in California since Oct. 1, 2020.

“‘That’s just depressing,’ said Lenya Quinn-Davidson, fire advisor for the University of California Cooperative Extension. ‘That’s so little, given how much land the Forest Service manages in California. It is just a drop in the bucket.’”

The problem is that fires are dangerous, and we cannot simply light a fire and hope for the best. To do a prescribed burn takes planning and some luck.

Thom Porter believes that prescribed burns will be an important part of wildfire management in the future, but it will take time to get there,

“There are a lot of areas that are overgrown, a lot of areas where it’s not safe to have fires on the ground under any circumstances and that’s why firefighting will continue to be a very important mechanism in our landscape regardless of whether we’re doing prescribed burning or not.

“… once we have safe areas to burn we will reintroduce fire and that will be the primary tool in the future. And I’m talking decades out. I’m not talking about today, tomorrow… We have to build that over an incremental basis over the next many, many years to get to the right place and the right combination.”

It has taken us a while to learn what the Native Americans knew: That fire can be as much a benefit to the health of our forests as a hazard, if we know how to work with it. As we improve forest management, expect to see more fire crews out there conducting prescribed burns.

P.S. An example of a prescribed burn

To understand just how much planning and care must be taken to perform a prescribed burn, take a look at the Incident Overview of the 53 acre “Valley RX Burns” in Yosemite Valley on Nov 3, 2021.

“Starting Wednesday, November 3rd, fire crews will be prescribed burning units 11 & 16 in Yosemite Valley. This is a continuation of burns conducted a week ago. … Ignitions will occur over the next few days. There will be trail closures in Yosemite Valley, … the objectives of this prescribed burn are to restore and maintain plant communities shaped by Native Americans, restore fire and a more natural ecosystem structure to communities, maintain meadows and healthy stands of conifers, reduce hazardous fuels, and provide protection to infrastructure. Each prescribed burn unit has defined weather parameters and firing patterns to ensure the objectives for each unit have a high potential for success. Yosemite fire and resources staff will monitor all prescribed burns to evaluate achievement of goals and help guide future prescriptions.

Visitors and employees should be aware that smoke may be present starting Wednesday and could linger to a much lesser degree into next week as large logs are consumed. Fire managers work closely with Park staff and the local air pollution control districts to time the prescribed burns to coincide with favorable weather and smoke dispersion conditions. Smoke impacts are always a consideration in the decision to begin any prescribed burning operation. Burning will only be conducted under favorable dispersal conditions as specified in the smoke permit.”