Experiencing an Earthquake and Building a Neighborhood 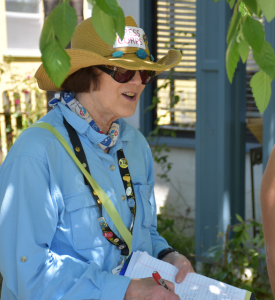 Last weekend, the Ventura neighborhood of Pepper and Olive Avenues in Palo Alto experienced a magnitude 4.3 earthquake along the San Andres followed by a 7.4 earthquake on the Hayward fault. Damage was significant across the bay area – no power, no water, no phones/internet and many structural failures, and bridges were down, freeway overpasses collapsed. This quiet neighborhood escaped the worst but still experienced massive shaking, broken items and glass, fallen water heaters, cracks in walls with continuing after shocks.

Not to worry. It was a neighborhood drill led by Susanne Jul of Creative Crisis Leadership in conjunction with Palo Alto Emergency Service Volunteers.

18 households participated. The drill consisted of a pre-event briefing and 2 rounds of scenarios. When the drill started each house was given an individual packet of earthquake impacts to their household that happened immediately after the quake and 3 days after. After residents experienced this first round, there was a period of reflection and discussion. The residents then received a second set of scenarios that again included immediate impacts after an earthquake and conditions three days after. During the drill, residents communicated their solutions to coordinators by sending photos and text messages. Coordinators stayed in touch with each other via hand-held radios.

The twin goals of this exercise were for neighbors to learn about the importance of emergency preparedness and for team leaders to study how people respond to disasters. After residents solved this set of problems, the group came back together for a final debriefing and sharing of experiences and lessons learned before a neighborhood BBQ,

Residents were resourceful during the 3 day scenario. Among the neighbors who were interviewed,

At the end of the exercise, many important lessons were shared.

Everyone reported learning something new. But the most important outcome was neighbors reaching out and helping other neighbors, realizing, as in this small corner of Palo Alto, that your best resource is your closest resource.

This neighborhood event was a pilot for Creative Crisis Leadership, whose mission is to understand and entrain spontaneous leadership skills. The goal is to increase community resilience by helping ordinary people practice improvising collective action in a crisis. The simulation was developed in cooperation with City of Palo Alto Office of Emergency Services. The event was supported by Palo Alto’s Know Your Neighbors Grant Program. To learn more about Creative Crisis Leadership see www CreativeCrisisLeadership.org.org or contact the Driving Force, Susanne Jul, at SJul@CreativeCrisisLeadership.org.

Annette Glanckopf is a regular with Palo Alto Emergency Services, where she serves as a CERT volunteer and NPC coordinator.