Six steps of federal disaster assistance – Under the hood of the U.S. federal process 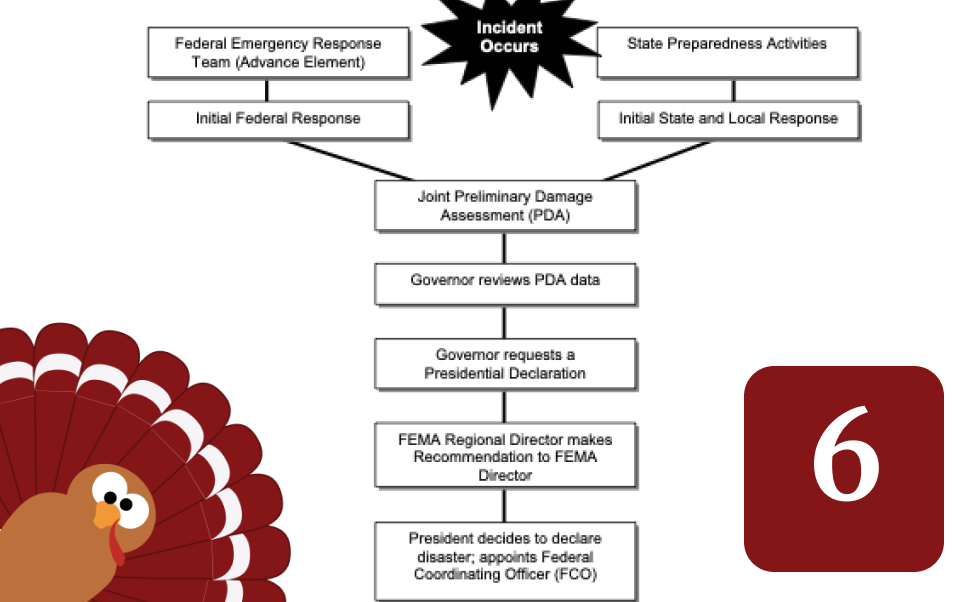 A Citizen’s Guide to Disaster Assistance

On the sixth day of Thanks and Giving, we give to you … six steps of the U.S. federal disaster assistance process.

In our last two posts, we talked about where and how to find help after a disaster. Today, we offer a glimpse into why disaster assistance is a complex matter. We look under the hood of the official U.S. federal response to disaster, led by FEMA. We hope this will shed clarity on what needs to happen for federal assistance to be distributed to disaster survivors.

The philosophy underlying federal assistance is that community and local government drive the relief effort:

The responsibility of preparing for disaster recovery begins with the individual and builds to the larger responsibility of the community and local government. The local government has the primary role of planning and managing all aspects of the community’s recovery. Community planning efforts are supported by voluntary, faith-based and community organizations; private sector; and State, Local, Tribal, Territorial and Federal Governments.
— National Disaster Recovery Framework Brochure

Federal assistance is available to supplement the resources of State, local, and voluntary agencies in major disasters.
— A Citizen’s Guide to Disaster Assistance, p. 3-1 (our emphasis)

The federal response process is initiated by a series of steps — see graphic above —
prescribed by a set of congressional acts, most notably the Stafford Act of 1988. A Declaration of a State of Emergency by the President of the United States is the key event that enables federal aid to be given to states for any incident.

Once approved, FEMA uses a series of official frameworks to direct their actions, including,

This post walks through how these frameworks are activated.

Preparation and time are critical when responding to a disaster. State and federal officials may begin their response even before the disaster occurs:

In predictable disasters, such as hurricanes, [Advanced Emergency Response Teams (ERT-A)] may be sent into the area before the storm strikes to set up emergency communications equipment and help coordinate early response efforts. An important role of the ERT-A is to obtain information on the impact of the event and identify the types of short and long-term assistance that may be needed.
— A Citizen’s Guide to Disaster Assistance

When the risk is high enough, the President may declare a State of Emergency in advance, as President Biden did for Florida four days in advance of Hurricane Ian’s landfall.

From the beginning, FEMA will work with state, local, nonprofit and private sector partners to provide relief. For instance,

Nearly a week before its first U.S. landfall … the American Red Cross mobilized more than 100 trucks loaded with tens of thousands of relief supplies, dozens of emergency response vehicles and hundreds of disaster responders to be ready to support families in the path of Hurricane Ian.

As the storm approached the coast, some 2.5 million Floridians were asked to evacuate and the Red Cross worked closely with our partners to support more than 200 evacuation centers.
— Hurricane Ian Relief Information | Red Cross

Unfortunately, tsunamis, earthquakes, and other less predictable disasters do not offer much warning, leading to delays before help can arrive.

… local officials declared a State of Emergency, acting in accordance with the local emergency operations plan. As the flood waters rose and spread and essential buildings suffered major damage, local officials determined that they did not have adequate resources to respond effectively … and asked the State for assistance. To support their request, local officials described the extent and types of damage caused by the flood. They asked for specific kinds of assistance, including help in evacuating persons from affected areas and in keeping people from entering unsafe highways or other restricted areas.
— A Citizen’s Guide to Disaster Assistance, p. 3-5

If the state agrees to the local request for assistance, the state governor will declare a State of Emergency, thereby releasing state resources.

If the State concludes that effective response needs may exceed both the State’s resources and those of the community, then the State can request that FEMA regional officials join them in conducting preliminary damage assessments (PDAs). Based on the PDA, the governor decides whether to request federal aid.

The request must include specific information required by law, including the nature and amount of local and State resources that have been or will be committed to disaster-related work. The request must also guarantee that the cost-sharing provisions of the Stafford Act will be met.
— A Citizen’s Guide to Disaster Assistance, p. 3-9

The above request process may seem lengthy. However,

In general, the larger and more severe the disaster, the less information is needed initially to support the request. A smaller or less obvious situation requires a greater amount of information to verify that Federal assistance is needed. An aerial survey conducted by FEMA and State officials might be enough to demonstrate the need for Federal help, although damage assessments would continue after the declaration to help manage response and recovery measures.
— A Citizen’s Guide to Disaster Assistance, p. 3-9.

Moreover, state and federal authorities do not just sit around and await a phone call:

Typically, when a disaster as serious as that in the [flood] scenario occurs, it is apparent from an early stage that not only State but also Federal assistance may be needed. State and FEMA officials would continually monitor the progress of the incident.
— A Citizen’s Guide to Disaster Assistance, p. 3-5

Thus, FEMA’s regional teams will be communicating with state and local authorities to assure a fast response as soon as it is determined that federal assistance is needed. As we saw above, for big enough disasters, FEMA may have the necessary Declaration of a State of Emergency that authorizes action before the event even happens.

Representatives of other response organizations such as nonprofits, local community organizations, and local businesses are typically included in these discussions. Most notably is the American Red Cross, which has a unique congressionally-chartered mandate “to carry out responsibilities delegated to us by the federal government.”

Formally, the FEMA Regional Director evaluates the governor’s request for federal assistance and makes a recommendation to the FEMA Director, who then reviews the recommendation, and passes it on to the President.

While this review may take time, it may be foreshortened for larger events, as we saw above. Indeed, in response to Hurricane Ian (2022), President Biden signed an Emergency Declaration for the State of Florida within hours of receiving the request from the Florida governor.

FEMA leads the federal effort, but is by no means the only agency involved. Seventeen federal agencies, plus the Red Cross, are listed as primary or support agencies for the fifteen emergency support functions (ESF) of the National Response Framework. These federal agencies along with state agencies and non-governmental organizations have a seat at the table when determining and delivering federal relief:

The Federal, State, private, and voluntary agency response team relationship is established and fostered at an initial meeting held as soon as possible after the President’s declaration. All Federal, State, and voluntary agencies that can provide some form of disaster assistance are invited to be represented at this meeting. Initial relief coordination procedures are established, especially the details of setting up and staffing sites where disaster victims can apply for assistance. The [Federal Coordinating Officer (FCO)] and [State Coordinating Officer (SCO)] conduct subsequent coordination meetings as often as needed to establish priorities and objectives, identify problems, and document achievements.
— A Citizen’s Guide to Disaster Assistance, p. 3-13

FEMA’s involvement in the response effort is determined by an agreement to which both FEMA and state authorities commit. Much of the agreement is based on the governor’s request for assistance,

This agreement describes the period of the incident (or disaster), the types of assistance to be provided, the areas eligible for assistance, the agreed-upon cost-share provisions, and other terms and conditions.
— A Citizen’s Guide to Disaster Assistance, p. 3-11

Many disaster assistance organizations, such as the Red Cross, only provide disaster response assistance. These are actions carried out immediately, to save lives, reduce economic losses, and alleviate suffering. However, people are in crisis long after the flood waters recede or the wildfire burns out. Homes may need to be repaired and communities rebuilt.

FEMA is in it for the long haul, helping individuals and communities for the full disaster recovery period:

The federal disaster response process may not be perfect, but consider all that has to happen for a well-considered response to happen. The description above is a tremendously simplified story – much, much more is going on than we have time here to describe. However, we hope this glimpse under the hood of the official U.S. federal response to disaster sheds some clarity on the process of getting federal aid to where it is needed.

So, once the earthquake has subsided, the wildfire is contained, or the tsunami has receded, know that a vast and complex response engine with many moving parts is working to help you. However, it might take time. So, be prepared to be proactive, work with your community, and do what you can to help yourself and those around you.

To celebrate the thanks of Thanksgiving and Giving Tuesday, today, we give a very special thanks to these federal, state, and local agencies dedicated to helping us in the darkest moments, especially FEMA, American Red Cross, State agencies such as CalOES and CalFire, and local agencies such as Sonoma County Department of Emergency Management, Oakland’s Emergency Management Team, and Palo Alto’s Office of Emergency Services.

If you want to help empower people to help themselves, please
support our work.
We thank you for all that you give.