Seven Questions of Disaster Management — The Evolution of US Philosophy 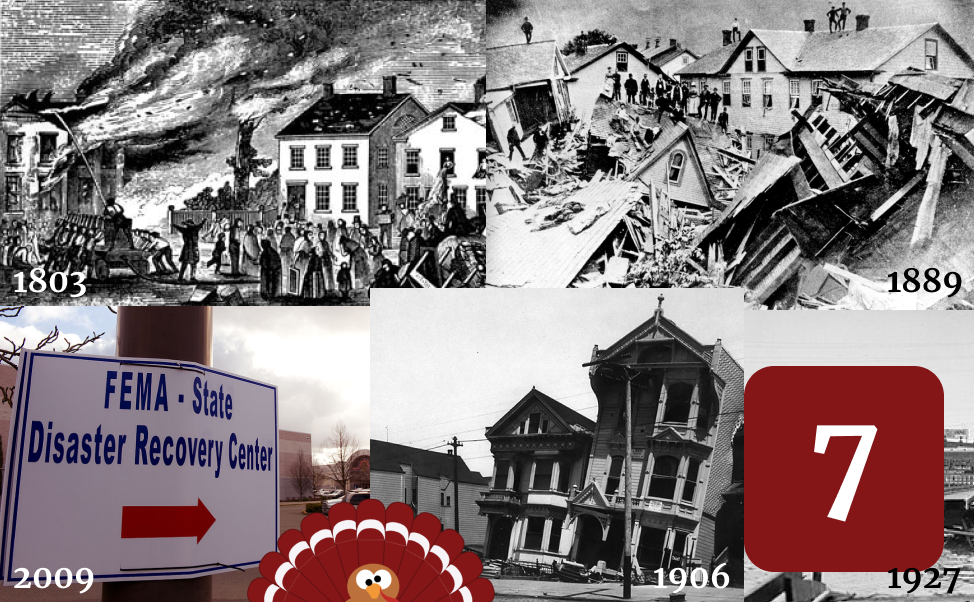 In our last post, we described how Federal disaster relief is activated in the US. Today, we look at the evolution of disaster management in the US. We are particularly interested in how the Federal philosophy has changed in regards to seven basic questions:

Today, the prevailing philosophy in the US is that disaster management is the responsibility of local and state governments. The federal government supplements state and local efforts when their resources are insufficient. The goal is to be able to handle a full spectrum of disasters, rather than any specific threats, the “all-hazards approach.” The priorities are preparedness and response in order to

To meet these objectives, the government seeks to include all stakeholders — communities, businesses, nonprofits — in planning and delivering services, the “whole-community approach.”

How did we get here, and is this the right philosophy?

Let’s start at the beginning.

Disaster management is a community responsibility

For most of human history, disaster management is a community responsibility. When a mastodon injures half the hunters and wipes out the food supply, it is up to the villagers to help themselves and each other. With luck, they might get help from a neighboring village. And they might build a fence or post guards to prevent it from happening again.

Responsibility, goals, priorities, authority and resources all lie in the hands of the community itself.

Gradually, idiosyncratic systems of aid evolve. Local governments take on partial responsibility for helping their constituents in a disaster. Each develops their own philosophy of what and how much should be done.

On Dec. 26 1802, a fire blazes through the wooden buildings of downtown Portsmouth New Hampshire, and destroys 114 buildings, including 100 homes. In Jan 1803, the US Congress approves “A Bill, For the relief of the sufferers by fire, in the town of Portsmouth” that authorizes the suspension

… for months, the collection of bonds due to the United States by merchants of Portsmouth, in New Hampshire, who have suffered by the late conflagration of that town.
— H.R. 11, 7th Congress of the United States of America

This is the first act of disaster relief by the US federal government. Notably, the goal is economic recovery, and the “sufferers” who receive assistance are merchants. Portsmouth was an important seaport at the time, and pragmatically, congressional aims were to mitigate impacts on trade.

Over the next 150 years, Congress passes 128 separate laws offering disaster relief. Each of these is in response to a specific disaster, and require full congressional approval. In most cases, assistance is financial, frequently in the form of suspending financial obligations to speed economic recovery and prevent cascading consequences for regional and national commerce. There is no mention of humanitarian relief.

The ad hoc nature of Federal assistance in this period is exemplified by two catastrophic events, the 1889 Johnstown flood and the 1906 San Francisco earthquake:

On May 31 1889, the South Fork Dam on the Little Conemaugh River in Western Pennsylvania fails. Within an hour, flood waters destroy the towns of Mineral Point, East Conemaugh and Johnstown, kill an estimated 2209 people, and cause $17M of damage (1889 dollars). Contributions for disaster relief come from all over the country and the world, but, as far as we can determine, not from the Federal government. [Nathan Daniel Shappee. A history of Johnstown and the great flood of 1889: a study of disaster and rehabilitation. 1940.]

On April 18 1906, a rupture on the San Andreas fault West and North of San Francisco California triggers a magnitude 7.9 earthquake. Within days, more than 3000 people are dead and 80% of San Francisco is destroyed. Again, contributions for disaster relief come in from all over the country and the world. Congress enacts emergency appropriations for the city to pay for food, water, tents, blankets, and medical supplies. They also allocate funds to reconstruct damaged public buildings. [San Francisco Earthquake, 1906 | National Archives.]

In the first event, the federal government apparently does not act. In the second, the government acts to speed economic recovery — again, of an important center of commerce.

While Federal funds are allocated to help pay for relief supplies after the San Francisco earthquake, the Federal government does not engage directly in the response. The US Army carries out relief activities, as they have in other disasters, e.g., after hurricanes ravaged Puerto Rico (1899) and Galveston Texas (1900). But such engagement occurs where the army is already present, and is authorized by local military officials.

… carry on a system of national and international relief in time of peace and to apply the same in mitigating the sufferings caused by pestilence, famine, fire, floods, and other great national calamities
— Our Federal Charter | Red Cross

After months of heavy rain in April 1927, a series of 145 levee failures cause the Great Mississippi Flood. 246 people die, 27,000 square miles are inundated, and more than 162,000 homes in the Mississippi river valley flood. President Coolidge creates a commission to organize and oversee the government response, coordinating resources and relief efforts with the Red Cross. This marks the first time the Federal government participates directly in disaster response.

The Great Mississippi flood is only one of numerous floods that plague the country. Between 1849 and 1936, Congress funds a series of flood control acts to aid navigation. Disaster prevention is a secondary effect.

The 1936 Flood Control Act is the first general bill that provides for flood relief throughout the country, and is the first piece of legislation to recognize flood control as “a proper activity of the Federal Government.” It also “states a principle … that the federal government should take primary responsibility for dealing with the menace of terrifying, huge floods,” officially establishing a Federal role in disaster prevention. [Joseph L. Arnold. The evolution of the 1936 Flood Control Act. 1988.]

In 1950, Congress approves the Federal Disaster Relief Act, clarifying and formalizing the role of the Federal government in disaster management,

… it is the intent of Congress to provide an orderly and continuing means of assistance by the Federal Government to States and local governments in carrying out their responsibilities to alleviate suffering and damage resulting from major disasters, to repair essential public facilities in major disasters, and to foster the development of such State and local organizations and plans to cope with major disasters as may be necessary.
— P.L.81-875;64 Stat.1109

The bill establishes a general Disaster Relief Fund, and places funds directly under presidential authority. That is, congressional approval is no longer required to fund disaster relief. It explicitly states that the Federal assistance supplements state and local government efforts, and establishes the principle that the Federal government is not a first-line provider of assistance. It also puts a cost-sharing policy in place whereby Federal assistance is supplied when, and only when, State and local governments have committed “a reasonable amount of the funds” needed.

Cold war politics add nuclear war to the country’s concerns. The Federal Civil Defense Administration develops civil defense programs across the country, encouraging individuals and communities to build bomb shelters. The Department of Commerce focuses on weather, warning, and fire protection, the General Services Administration on continuity of government and federal preparedness, the Department of Housing and Urban Development on flood insurance and disaster relief.

By 1974, more than 100 federal agencies are involved in some aspect of risk and disaster. The problems of a decentralized approach become apparent: States don’t know where to go when a disaster actually hits.

On April 1 1979, Executive Order 12127—Federal Emergency Management Agency takes effect, putting the provisions of Reorganization Plan No. 3 of 1978 into place. This

However, the new agency experiences two challenges in developing a coherent philosophy for carrying out its mission. First, it is staffed with political appointees with little or no disaster management experience. Second, the next decade is relatively free of major disasters, and nuclear attack dominates national fears. Natural hazard programs receive little attention and suffer from attrition of funds and experienced personnel.

In the face of calls to disband the agency, newly elected President Clinton appoints James Lee Witt as Director. For the first time, FEMA is led by someone with emergency management experience. Things change quickly.

Agency priorities are expanded to include prevention and mitigation, and now cover all five phases of contemporary disaster management practice. An overarching goal is set to be able to handle any hazard. To achieve this comprehensive vision, the agency engages in a new community-based approach that aims to build partnerships with states and local authorities, and bring risk and risk avoidance considerations into communities’ everyday decision-making. For the first time, the business sector is included as a stakeholder.

By 2000, FEMA is recognized as the preeminent emergency management system in the world.

The 1995 Oklahoma City bombing brings concerns of terrorist attack to the fore. However, the knowledge, resources and technologies needed to deal with biochemical warfare and weapons of mass destruction are very different from what is needed for managing natural hazards. By 2000, authority and responsibility for addressing terrorist events is spread over several agencies.

A year later, on Nov. 25 2002, the Homeland Security Act of 2002 (HS Act; Public Law 107-296) establishes the Department of Homeland Security (DHS). The stated mission of the new department makes makes the goal of ‘natural’ disaster management a poor relation:

(A) prevent terrorist attacks within the United States;
(B) reduce the vulnerability of the United States to terrorism;
(C) minimize the damage, and assist in the recovery, from terrorist attacks that do occur within the United States;
(D) … [act] as a focal point regarding natural and manmade crises and emergency planning; [emphasis added]
[(E-F) ensure that other efforts and economic security are not diminished]
(G) monitor connections between illegal drug trafficking and terrorism, coordinate efforts to sever such connections, and otherwise contribute to efforts to interdict illegal drug trafficking.
— HS Act; Public Law 107-296, Sec. 101

FEMA loses its status as an independent agency, and no longer has direct access to the president. Its personnel and funds are redistributed within DHS, once again decentralizing authority and resources for disaster management. New levels of bureaucracy create confusion over who would be in charge in a disaster.

In the wake of widespread criticism, FEMA is reorganized. Again. While it remains part of DHS, the Post-Katrina Emergency Management Reform Act of 2006 (Public Law 109–295), brings all emergency functions back into the agency, protects its resources from reassignment, and gives the FEMA Administrator direct access to the President.

The new FEMA management adopts a top-down philosophy in which the Federal government is to take charge in a major disaster, supplanting state and local efforts.

This doctrine is short-lived.

In 2011, FEMA releases a “A Whole Community Approach to Emergency Management: Principles, Themes, and Pathways for Action,” which lays down a local and state-driven all-hazards philosophy, and embraces a collaborative role of government,

Government can and will continue to serve disaster survivors. However, we fully recognize that a government-centric approach to disaster management will not be enough to meet the challenges posed by a catastrophic incident. That is why we must fully engage our entire societal capacity….
— Craig Fugate

The organization, planning and application of measures preparing for, responding to and recovering from disasters.
— Disaster management | UNDRR

We believe that a network of complementary philosophies is needed to meet the world’s disaster management needs. That is, that there are many “right” answers to these questions. We believe that increasing resilience requires developing community and government philosophies that complement each other rather than seeking to make them one.

To celebrate the thanks of Thanksgiving and Giving Tuesday, today, we give a very special thanks to the many disaster management professionals who have fought to advance the philosophies of disaster management, including James Lee Witt, Craig Fugate, Barbara Cimino, Ken Dueker, Nancy Brown, Olga Crowe, Terry Unter, and Luke Beckman.

To help us promote a community-powered disaster management philosophy, please
support our work.
We thank you for all that you give.